No comments to show.
10 Best Examples Of VR And AR In Education 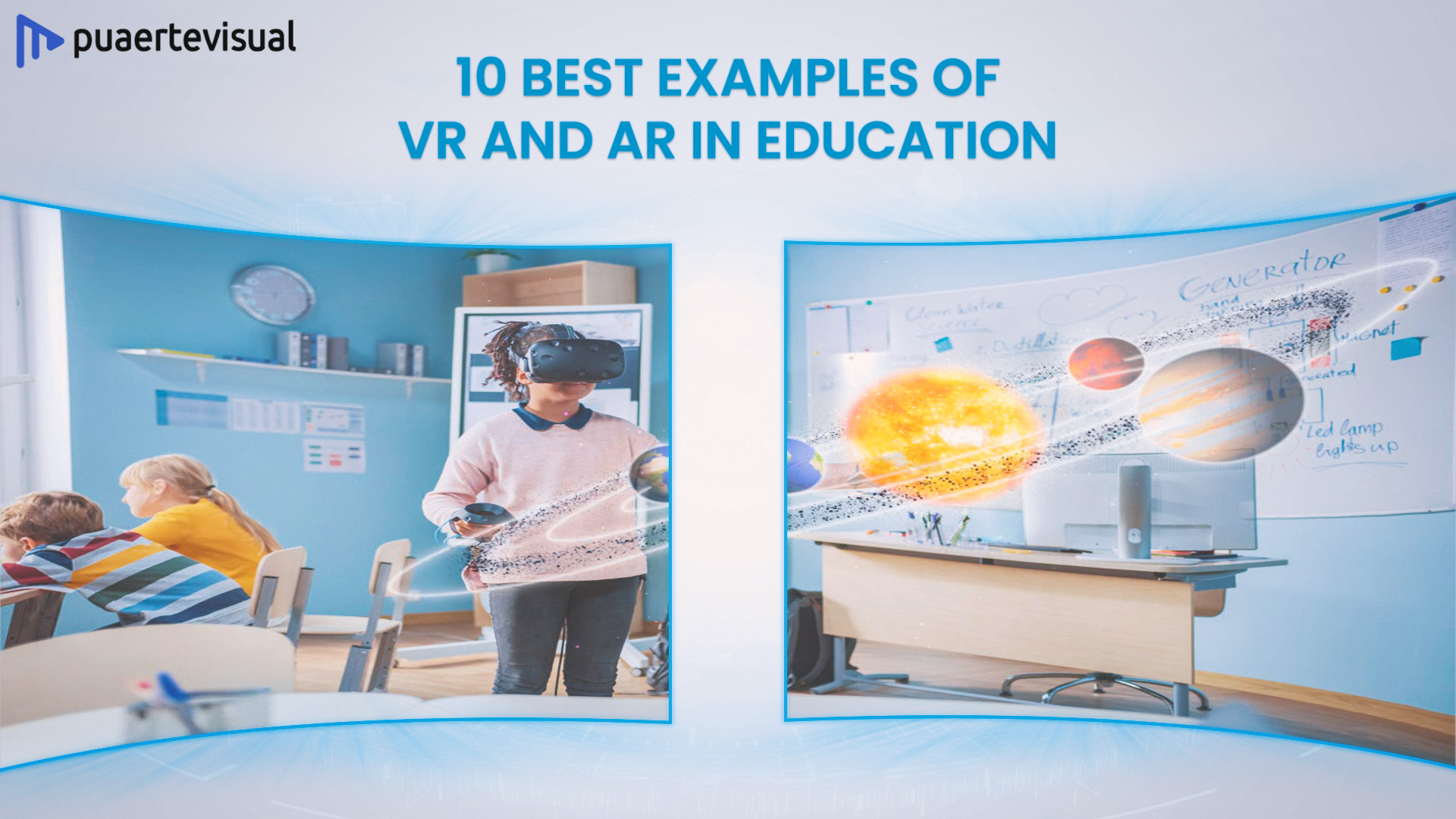 VR and AR are two of the most exciting technologies to enter the education sector in recent years. Both offer unique opportunities to engage students in new and innovative ways, helping them learn and understand complex concepts more easily.

In this post, we will take a look at 10 of the best examples of VR and AR in education. From museums using VR to teach history, to surgeons using AR for training, there is something for everyone!

First, let’s take a look at what both these technologies mean and how they are integrated with schools and other educational institutions.

Introduction To VR And AR In Education

VR is an immersive, three-dimensional environment that’s created from scratch. It usually requires the use of a headset and controllers, which allow users to interact with the virtual world around them. AR, on the other hand, is a technology that overlays digital information onto the real world.

VR and AR are often confused with each other, but they are actually quite different. VR creates an entirely virtual environment that users can interact with, while AR uses the real world as its foundation and adds digital elements to it.

By using both these technologies, educators can create immersive learning experiences that are more engaging and effective than traditional methods. After all, there’s no better way to learn than by actually doing!

10 Best Examples Of VR And AR In Education

Let’s now take a look at some of the best and most innovative ways in which VR and AR are used in education.

SkyView is an application that uses AR in education to take users on a tour of the night sky. It’s an ideal way for students to learn about astronomy, as they can explore different constellations and planets up close.

All you need is a smartphone with the app and a clear night sky. Star-gazing has never been more fun!

Google Expeditions takes students on virtual field trips to different locations around the world. From the Great Barrier Reef to the International Space Station, there are over 600 Expeditions to choose from.

Each Expedition comes with its own set of VR content and educational materials, making it a great way to learn about different cultures and environments.

Microsoft Hololens has partnered with Case Western Reserve University to create HoloAnatomy, a VR app that allows students to explore the human body in detail.

Users can study different parts of the body and even view them from different angles. It’s an excellent way for students to learn about anatomy in a fun and interactive way. With this app, we no longer need actual human cadavers in the pursuit of knowledge.

BBC has created a VR experience that transported viewers back in time to the Blitz of 1943. Real-life footage of nighttime Nazi raids in London is brought to life with VR, giving viewers a first-hand look at what it was like to live through the bombings.

This experience is an excellent way to educate people about one of the most important events in history. It’s also a powerful reminder of the devastation that war can cause.

Imagine being able to watch a volcanic eruption up close, or see what happens when you mix different chemicals together. VR can make this a reality!

With AR and VR equipped science labs, teachers can bring science experiments to life like never before. Students are free to experiment to their heart’s desire without any safety concerns that are usually accompanied in an actual lab.

VR in education also allows history classrooms to bring ancient civilizations to life. Students can walk through the streets of Pompeii, or explore the inside of a pyramid without leaving the classroom.

By putting users in these situations, they are able to practice and hone their skills without any real-world consequences. This is an excellent way to help people who suffer from anxiety or stage fright.

Mondly is a brilliant language learning software that integrates VR in education of various languages. It allows students to travel to any part of the world and learn the local language from a native speaker.

With VR, students can immerse themselves in the culture and environment of the country they’re learning about. This makes for a much more effective way of learning compared to traditional methods.

The VR Museum of Fine Arts is an excellent way for students to learn about art history. It’s a Steam app that gives users a tour of some of the world’s most famous museums, including the Louvre, the Metropolitan Museum of Art, and the Prado.

In the olden days, students had to dissect frogs in their biology labs in order to learn about anatomy. VR has made it possible for students to dissect animals without harming any living creatures. The Froggipedia app allows users to dissect a frog and learn about its anatomy in VR.

It also allows students to explore the various organs and systems of the frog’s body. VR also helps to create a virtual autopsy table, which allows users to dissect even the human body without any ethical concerns.

AR in education is not just for students and college-goers. It’s also useful for various professionals such as police officers, firefighters, and pilots.

This is a much more efficient way of learning than traditional methods. AR and VR allow these professionals to train for various emergencies in a safe and controlled environment. It also allows them to do so without having to leave their workplace.

As you can see,  VR and AR have a lot to offer when it comes to education. These are just some of the many ways in which VR and AR are being used in education. With so many possibilities, it’s hard to imagine a future without VR and AR in education. Do you think VR and AR will revolutionize education? Let us know in the comments below.

Book A Free Demo
Next
Use of MR, VR, AR in Manufacturing and Logistics
Cancel Reply
Get In Touch!