No comments to show.
What is mixed reality? A Simple explanation for anyone 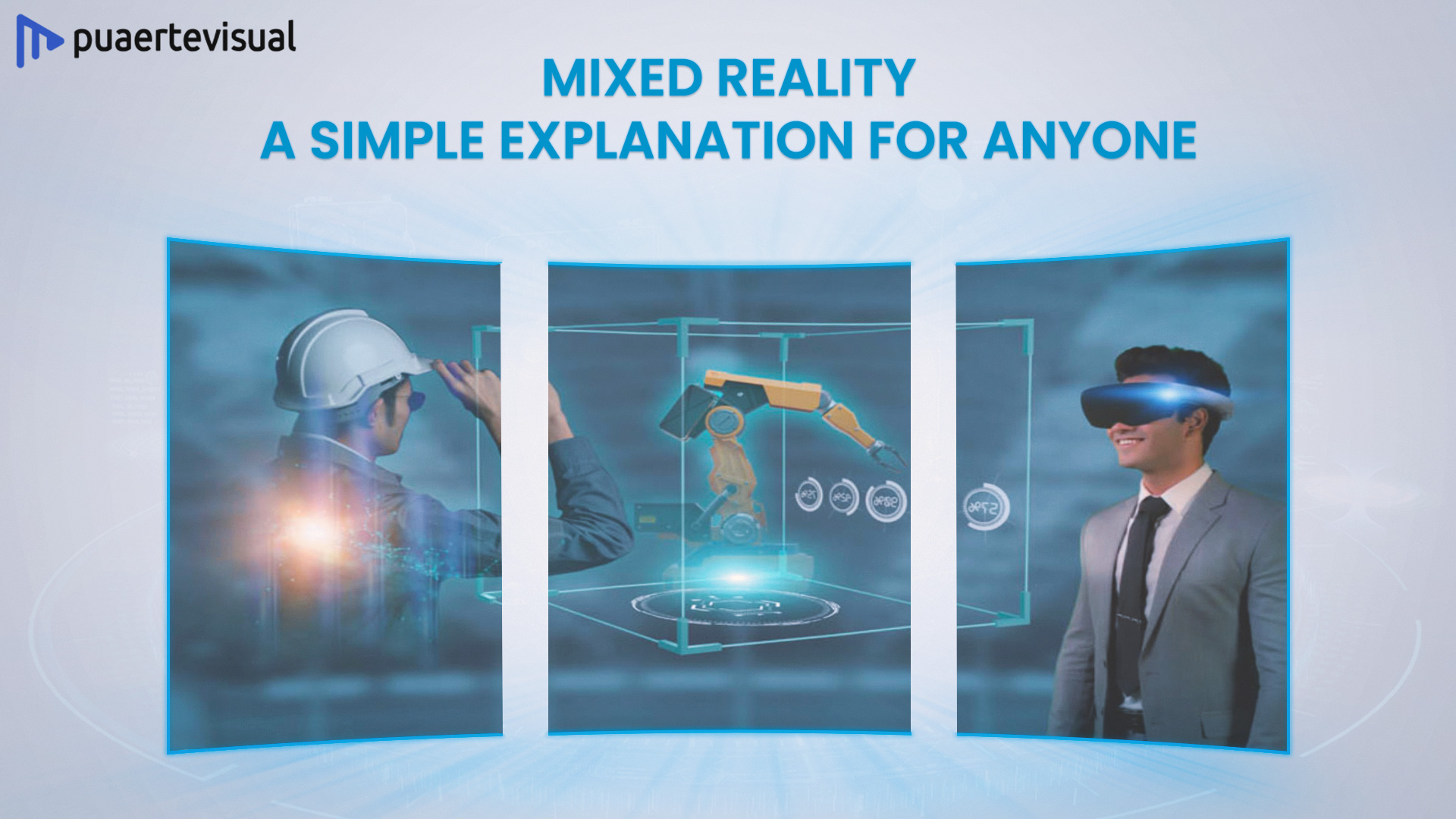 What is Mixed Reality?

The real and virtual worlds collide in Mixed Reality. Virtuality and reality interact in real-time in MR. Through high-level imaging and sensing technologies, MR allows users to control and communicate with virtual and actual worlds or objects. With its ability to apply digital information directly to a worker’s real-life experience, this technology can alter the workplace. This capacity explains why corporations and researchers are drawn to most MR systems. The phrase “extended reality” (XR) refers to all of the realities as a continuum.

However, the creation of Augmented Reality (AR) and Virtual Reality (VR) began long before the invention of MR. While AR and VR are currently used in the entertainment and gaming sectors, these technologies are increasingly being used in business, education, and instructional settings.

The creation of a realistic mixed reality experience is currently ongoing.  Like other aspects of the XR environment, the epidemic has driven MR investment, as it requires more immersive, virtual experiences. Introducing new technologies into the landscape will only increase what we can achieve with MR in the future.

Companies, for example, are already using 5G solutions to minimize latency and boost data transfer speed. Artificial intelligence might potentially be very valuable in developing MR technologies that can grasp the relationships between actual and virtual material. The advent of new, upgraded software in the MR scene, along with the expanding availability of technology for making lightweight, powerful smart glasses, might mean we witness a new, mixed reality future much sooner than thought.

On-site teams can use Mixed Reality to evaluate the quality of their work, reduce mistakes, and stimulate quick communication loops. By enabling real-time visual inspection of the constructed product, this system can assist in integrating quality assurance into the manufacturing process.

The number of organizations that use obsolete manuals is gradually decreasing. They’re now adopting Mixed Reality to cut down on maintenance callout times. Moreover, it allows you to quickly connect with an expert hands-free. To put it another way, an engineer may dial a support number and share the same screen as the remote expert on the other end. Because of their adaptability, experts can give instructions and solutions without being afraid of being misunderstood.

One important element is the speed with which new employees can be taught. In addition, by leveraging remote assistance through HMDs, any vital skills lost by retiring workers may be kept in a mixed reality-led setting. Manufacturers may have a simpler onboarding process by using a new technology known to a younger generation when it comes to hiring the appropriate people.

Employees can obtain instructions or attend Mixed Reality Training rather than scrolling through many manual pages. Because sessions may take place on the job, the time spent developing training modules and training expenditures is reduced. Training sessions may now be enhanced or even replaced utilizing mixed reality, whether they are held in a classroom or using study guides in the form of books and online courses. Users may be directed through modules step by step, with training information overlayed on real-world components and assemblies in front of them, cutting down on the time it takes to increase workers’ skill sets. Because training may be done on the job, there may be less need to remove employees from the production line.

The physical world and the digital world are combined in mixed reality. And it’s spreading quickly through many channels and gadgets. This is how it goes.

Mixed Reality isn’t only about real and virtual experiences; it’s also about the technology that makes it possible. These technologies range in size from small portable devices to large rooms, and each has a variety of applications in many fields.

Display on the Head (HMD)

A head-mounted display (HMD) projects a picture directly to the user through a tiny display optic in front of each eye. This device is worn over the head or as part of a helmet. Entertainment, medical, engineering, gaming, and aviation are just a few of the applications for HMD. As significant technology firms build HMDs to complement their current goods, their customers are primarily in the entertainment business. Unfortunately, because they don’t interact with the actual environment, these head-mounted displays are completely digital. However, a well-known augmented reality head-mounted display (HMD) performs better in a business setting.

The head-up display (HUD) displays information without requiring users to glance away from their current position. The transparent gadget is made up of three parts: A projector is a device that projects visuals onto a screen.

The computer integrates the other components with the combiner, the platform on which the graphics are displayed. It also does any necessary modifications or computations in real-time. One of the first HUD uses in car transportation was Pioneer’s Heads-up system. The sun visor on the driver’s side has been replaced with a display that informs the driver of traffic instructions.

On an LED screen, mobile devices no longer have computer-generated interfaces. Toolkits for building augmented reality applications are now available for smartphones and tablets.

Consolidating the real and virtual worlds into a single reality

The barriers separating actual and virtual worlds are disappearing thanks to mixed reality. People think that the continual advancement of technology will eventually lead to humanity adopting a digital form. Despite the drawbacks of a completely digital society, this study believes that Blockchain technology can help underdeveloped countries.

Mixed Reality (MR) is a step forward from Augmented Reality, in which more data is added to what a user sees. The physical and virtual worlds collide in MR, and users may interact with both. According to the computer chip maker Intel website, MR “allows you to have one foot (or hand) in the actual world and the other in an imagined location.” While AR improves a user’s perspective of the actual world, MR can blur the line between what is real and what isn’t. Mixed Reality (MR) allows users to control and communicate with virtual and actual worlds or objects. MR can apply digital information directly to a worker’s real-life experience, this technology can alter the workplace. The promise of mixed reality gets more intriguing as technology advances and inventors explore new ways to blend the virtual and real worlds. Mixed Reality isn’t only about real and virtual experiences; it’s also about the technology that makes it possible.

One important element is the speed with which new employees can be taught. Training sessions may now be enhanced or even replaced utilizing mixed reality. Users may be directed through modules step by step, with training information overlayed on real-world components in front of them.

Book A Free Demo
Next
What Is Augmented Reality? Here’s What You Need to Know